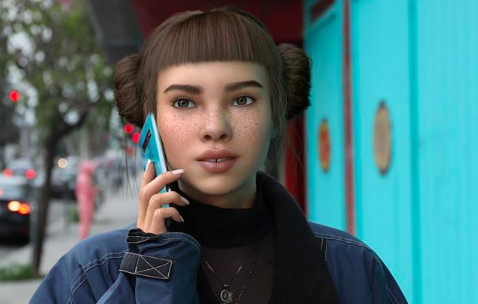 Lil Miquela has it’s own clothing line, parties in the hippest clubs and sits in the front at fashion shows. This influencer has almost one million followers on Instagram. Only: Lil Miquela is not real.

Lil Miquela is an avatar. Generated by a computer. “Given her popularity, it doesn’t seem to matter to her followers,” says Instagram expert Kirsten Jassies. The Insta account @lilmiquela has been in existence for over a year and a half. In that time, she has managed to score more than 800,000 followers. And she is the first but probably not the last virtual influencer. “It is very, very modern,” says Jassies. “We will deal with this much more often in the future.”

Miquela is on the border of the real world and social media, explains Jassies. Because of her mysterious inventors (according to some she is a creation of a graphic designer from Los Angeles, who denies it), she is photographed in real situations. She ‘just’ walks down the street and sits in normal cafes. She has her own clothing line and also a singer. Her debut single Not Mine reached the Spotify Viral top ten. Miquela also seems to be concerned about the world. In addition to Instagram, she is active on Facebook, Twitter and Tumblr, where she ‘supports’ Black Lives Matter and refugee organizations. She mainly does that by liking those pages, but she is not really an ambassador.

For what purpose Lil Miquela was really created, remains unclear. “A missed opportunity,” says Jassies, who sees her as a form of protest against all online fakeness. ‘There is already a lot of fake in the Instagram world anyway. In my eyes, this is an indictment of that trend: that some influencers who are hot now are only talking about expensive brands and hip events. ‘ Such a virtual account would, according to Jassies, be a good tool to start a discussion about this. ‘Is it bad if someone is fake? Aren’t those real people that we are seeing ‘en masse’ also fake? It’s good for young people to think about it. ”

Here’s Chris pretending he’s not weirded out @ me asking whether Billy Ray would ever make a beephaw remix to “Right Back.” It drops 4/10! 💟🔙 Pre-save link in biiioooo.

Jassies just would have preferred Miquela’s creators to go one step further. ‘I am in favour of showing you all your possessions and hews. So also your less beautiful sides and moments. Then you get real involvement. I don’t see that with many young Instagrammers, nor with Miquela. Her story is just too superficial. Someone who already did that is the black ‘Instagram model’ Shudu Gram. She recently went viral when it turned out that she was a creation of a British photographer. He wanted to shake up the idea that people have of reality and make them think about what is real and what is fake. Jassies thinks that is a nice statement. “Because he is so open about it and denounces the perfection of Instagram and the whole world around us, it adds something. Miquela is not doing that yet. It would be nice if she would play a role in that in the future. “